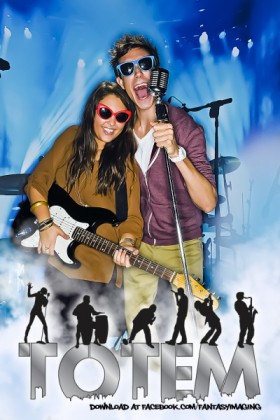 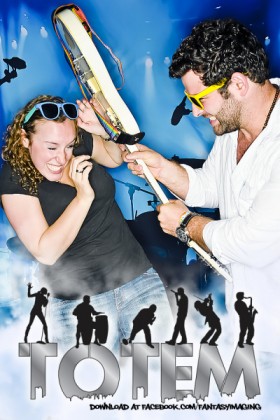 There’s a new event entertainment band in town and they are called TOTEM! This was their launch event and they wanted something that would impress as well as entertain their party guests.

The band have a young and fresh image, so we created a visually captivating and interactive backdrop for the Pictures are Power photo booth system with a music theme. We gave the guests real guitars and retro microphone to play with and asked them to release their inner rock star giving us some fantastic shots!

We branded the completed images with the band’s logo, and created reverse sleeve advertising behind each photograph featuring sponsor’s logos. As well as printing the images for the guests live at the event, we immediately uploaded the shots to Facebook to get the brand out there!

Over 200 branded photographs were handed out at the event and Facebook reach was nearly 1,600, with over 700 people sharing or talking about the photographs online.

What The Client Said

We loved the Pictures are Power system, it gave us an amazing dimension and photo quality that we don’t think a standard photo booth could achieve. It’s great to know that Facebook has carried our brand even further after the event too

Keep up to date with all our latest innovations and promotions.